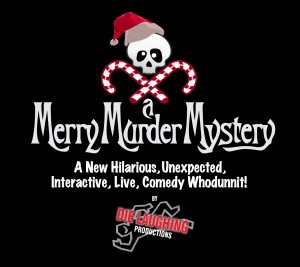 Tis the season for another Die Laughing Productions hilarious whodunit Murder Mystery Show. From the people who brought you “Back to the 80s” and “The Newly Dead Game” comes, “A Merry Murder Mystery.” You are transported to Nakatomi Consulting’s annual Holiday Party and Secret Santa gift exchange. The guest who gives the best gift will be the hit of the party. The one with the worst gift might just end up dead.

98 Rock morning show co host Justin Schlegel, Rob Maher, Joe Robinson and Tommy Sinbazo return to star alongside you, the audience. Several willing audience members will get to play roles in the production and everyone in the audience will get to guess, who’s been naughty and who’s been nice.