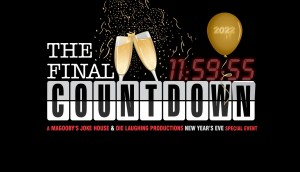 Die Laughing Productions proudly presents a New Year’s Eve Murder Mystery Celebration, The Final Countdown. You’re at the star-studded gala thrown every New Year’s Eve by billionaire Beauregard Beuford Dubois III. But before the champagne pops or the ball drops, a body does. It’s now up to you to solve this hilarious whodunit before the clock strikes midnight. It’s The Final Countdown!

The Final Countdown stars Justin Schlegel from 98 Rock’s Justin, Scott and Spiegel Morning Show as well as fellow 98 Rocker’s Joe Robinson, Rob Maher plus comedians Sean Gabbert, Tommy Sinbazo, Katie Robinson and Erik Woodworth. However the real stars of the show are you, the audience. We have several volunteer roles available and all of you will get a chance to solve this special New Year’s Eve whodunit.

Let’s make this the best night of your 2021, and bring in 2022 with plenty of drinks, laughs…and a murder to solve. Happy New Year!