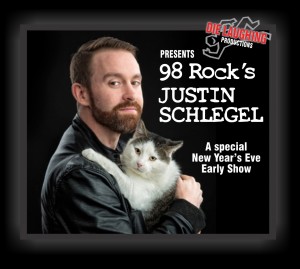 Ring in the New Year with Baltimore’s funniest comedian 98 Rock’s JUSTIN SCHLEGEL Justin can be heard every morning as one of the hosts of the #1 rated morning show in Baltimore, Justin, Scott, & Spiegel on 98 Rock, has been a featured performer at the Just For Laughs comedy festival, the Bridgetown Comedy Festival, and has been seen on VH1, Lifetime, and Comedy Central! Along with Justin, catch one of the rising stars of the Baltimore comedy scene- ROB MAHER. DELUXE PACKAGE also available.