Bright Box Theater – Back to the 80s 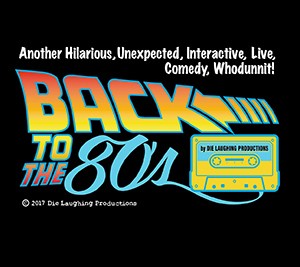 Die Laughing Productions is back with another hilarious whodunit Murder Mystery Comedy Show. From the people who brought you “A Merry Murder Mystery” and “The Newly Dead Game” comes “BACK TO THE 80’s. You are attending an event at Glenbrook North High School in Chicago, IL. Students, faculty and alumni are gathering to open a time capsule that was planted exactly 30 years ago. But a still unsolved murder case will transport you back to that time when gas was under a dollar a gallon and cell phones were the size of a brick.

This Ferris Bueller, Marty McFly and all things 80’s murder mystery mashup stars 98 Rock morning show host Justin Schlegel. Joining him again will be comedians Rob Maher, Joe Robinson and Tommy Sinbazo (also 98 Rock regulars), plus the show-stealing Erik Woodworth. However, the real stars of the show are once again, you the audience. Some of you will get to play parts in the show and all of you will guess who the murderer is. Guess right and you could win something bitchin’. Guess wrong and you’ll be a butt-head!