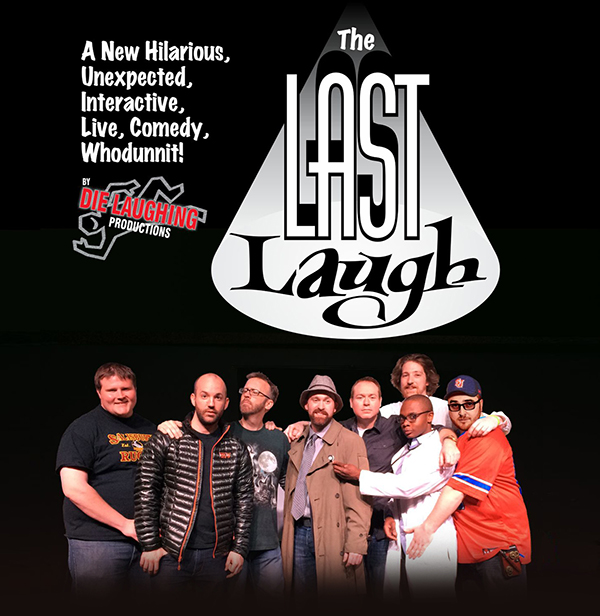 The Last Laugh is a Murder Mystery Comedy Show. This hilarious, interactive whodunit stars 98 Rock Morning Show co host Justin Schlegel. Justin plays famous comedian/movie star Jim Marsdale. Jim has returned home to be roasted.  Unfortunately, the roast is tragically interrupted by a murder. It is now up to you the audience to find out who did it.

The Last Laugh also stars comedians and 98 Rock regulars Joe Robinson, Rob Maher, Tommy Sinbazo and most importantly, you. This is an interactive show. Audience members will play roles. Not only will you help determine who the murderer is, one of you might even be the killer. 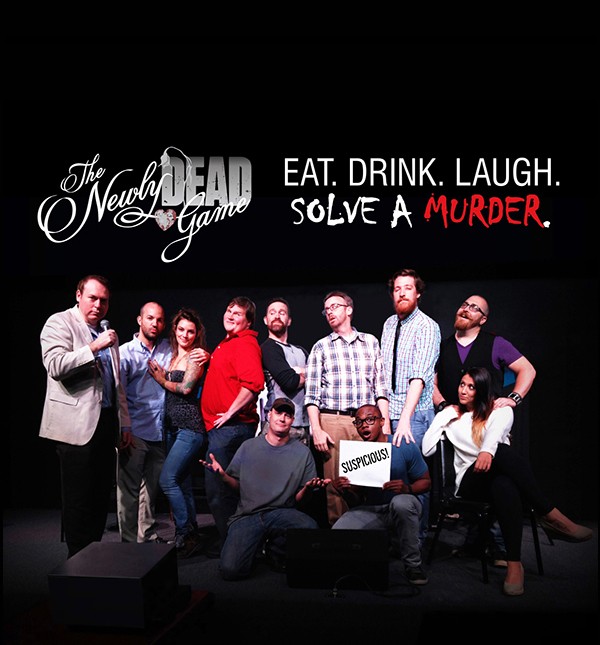 Die Laughing Productions is back with another hilarious whodunit Murder Mystery Comedy Show.  From the people who brought you “The Last Laugh,” comes “The Newly Dead Game.”  You’re at a TV taping of the popular game show Clash of the Couples; a show where couples compete for cash and prizes. One couple will win it all and one contestant will lose more than the game, they’ll lose their life.

Fresh off his award–winning performance in “The Last Laugh,” 98 Rock morning show host Justin Schlegel is back as the star of “The Newly Dead Game. Joining him again will be comedians Rob Maher, Joe Robinson and Tommy Sinbazo; also 98 Rock regulars.  However, the real stars of the show are once again, you the audience. Some of you will get to play parts in the show and all of you will guess who the murderer is. Guess right and you could win something new and shiny. Guess wrong and you’ll live with the shame and despair forever. 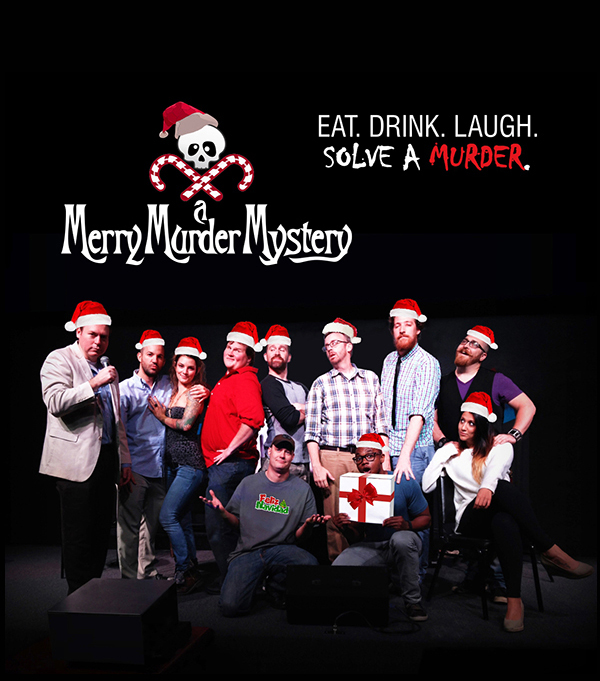 Have Yourself a Merry Murder Mystery, Solve a Crime Tonight
Laugh and Drink As Someone’s Murdered in Plain Sight

Tis the season for another Die Laughing Productions hilarious whodunit Murder Mystery Show. From the people who brought you “The Last Laugh” and “The Newly Dead Game” comes, “A Merry Murder Mystery.”  You are transported to Nakatomi Consulting’s annual Holiday Party and Secret Santa gift exchange. The guest who gives the best gift will be the hit of the party. The one with the worst gift might just end up dead.

98 Rock morning show co host Justin Schlegel, Rob Maher, Joe Robinson and Tommy Sinbazo return to star alongside you, the audience. Several willing audience members will get to play roles in the production and everyone in the audience will get to guess, who’s been naughty and who’s been nice. 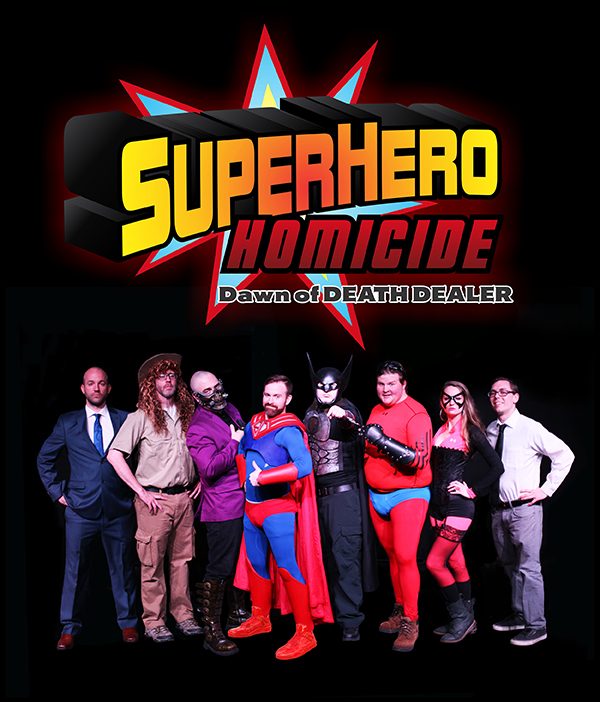 Die Laughing Productions enters the world of Superheroes and Supervillians with Superhero Homicide: Dawn of Deathdealer. This hilarious, interactive murder mystery show transports you to the Superhero hall of fame, the Hall of Heroes. One of the world’s greatest Superheroes is about to be inducted into the Hall but unfortunately, things do not go as planned. Superheroes plus Supervillians equals a super sized murder and it’s up to you figure out who did it.

Superhero Homicide stars 98 Rock’s own superhero, Justin Schlegel but most importantly it stars you. Everyone has a little superhero in them and this is your time to prove it. Put on your detective hat and cape and solve this murder. The future of the world depends on it. Real life Superheroes get in free. 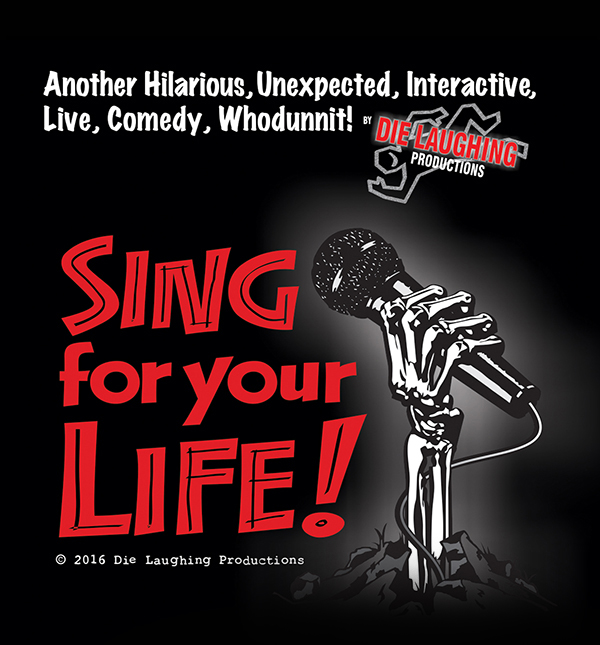 Sing For Your Life

You’re at a TV taping of Karaoke Krown, a show that chooses who will reign as King or Queen of Karaoke! But before someone takes the crown, someone takes a life. This hilarious, interactive whodunit is part TV singing show parody and part live karaoke night.

Sing for Your Life stars 98 Rock’s Justin Schlegel, Hip Hop diva Solé and as always, you. We have speaking and singing parts available for all you wannabe thespians and crooners out there.

Sing a song. Solve a murder. See you there. 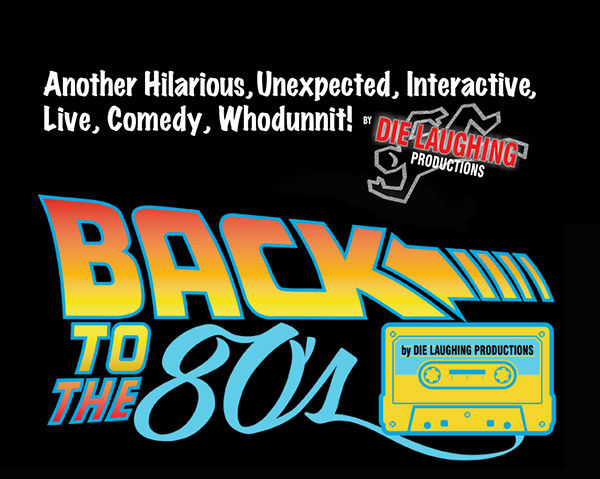 Die Laughing Productions is back with another hilarious whodunit Murder Mystery Comedy Show. From the people who brought you “A Merry Murder Mystery” and “The Newly Dead Game” comes “BACK TO THE 80’s. You are attending an event at Glenbrook North High School in Chicago, IL. Students, faculty and alumni are gathering to open a time capsule that was planted exactly 30 years ago. But a still unsolved murder case will transport you back to that time when gas was under a dollar a gallon and cell phones were the size of a brick.

This Ferris Bueller, Marty McFly and all things 80’s murder mystery mashup stars 98 Rock morning show host Justin Schlegel. Joining him again will be comedians Rob Maher, Joe Robinson and Tommy Sinbazo (also 98 Rock regulars), plus the show-stealing Erik Woodworth. However, the real stars of the show are once again, you the audience. Some of you will get to play parts in the show and all of you will guess who the murderer is. Guess right and you could win something bitchin’. Guess wrong and you’ll be a butt-head!

Be afraid. Be very afraid. Die Laughing Productions is back and ready to scare up some laughs with Halloween Whodunit. You’re on the set of a horror movie titled: The Friday the 13th After Next. Things take a horrific turn and the movie set becomes a crime scene. Lights, camera, Murder! You WILL see dead people.

Halloween Whodunit stars favorite 98 Rock comedians Joe Robinson, Rob Maher and Tommy Sinbazo, but most importantly you the audience. This is an interactive spooky spectacular. One of you might even be the killer. Showing up dressed as your favorite ghoul or goblin is encouraged…as are tricks and treats. 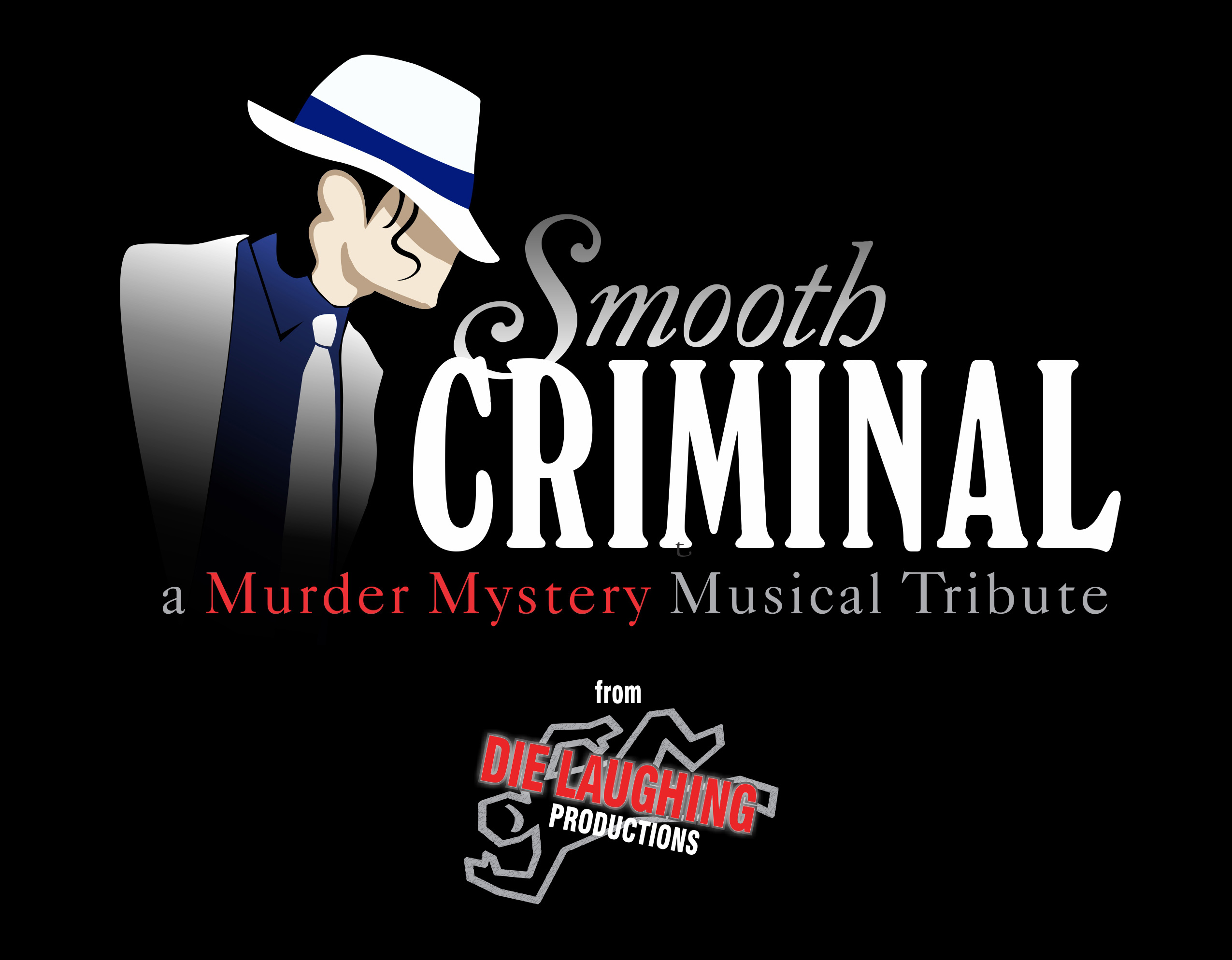 Who’s BAD? Die Laughing Productions is back and badder than ever. From the people who brought you “A Merry Murder Mystery” and “Halloween Whodunit” comes “SMOOTH CRIMINAL”, a murder mystery musical tribute to the King of Pop.

You’re at the final audition to see who will become the lead singer of the world’s greatest Michael Jackson tribute band, The Smooth Criminals. Unfortunately, the auditions take a Dangerous turn and someone drops dead.

“Smooth Criminal” stars 98 Rock’s Justin Schlegel as well as comedians Rob Maher, Tommy Sinbazo, Franqi French and Erik Woodworth. But most importantly, this is an interactive show with audience roles available…and everyone gets to guess who the killer is. It could even be the man (or woman) in the mirror. 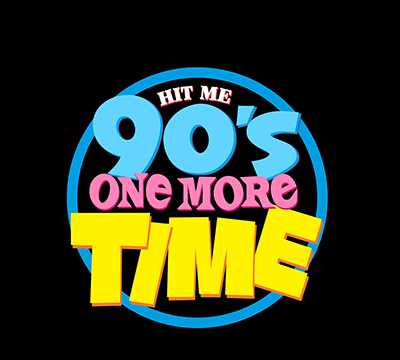 Hit Me 90s One More Time

Die Laughing Productions is back with another interactive, hilarious whodunit. This time we’re taking you back to the 1990s with “Hit Me 90’s One More Time”. You’re at a radio station promotional event where listeners battle it out for the hottest concert ticket of the year, Ace of Base. Everything goes smoothly and no one dies. Not! Some unlucky person will not just be losing their religion, but meeting their fate!

“Hit me 90’s One More Time” stars 98 Rock’s Justin Schlegel, Two Princes, Mr. Jones, all of your favorite Die Laughing Productions comedians and most importantly, you the audience. Come celebrate the 90s with us for all we really wanna do is have some fun, jump around and help you get through this semi-charmed kind of life.

We’re having a wedding and you’re all invited. Die Laughing Productions presents Love and Marriage and Murder. It’s the bride and groom’s big day. Bells will ring, the sun will shine, they’ll love until the end of time. End indeed! This is a murder mystery; a wedding whodunit! Can you solve it and live happily ever after?

Love and Marriage and Murder stars 98 Rock’s Justin Schlegel, Joe and Katie Robinson (our real life newlyweds) and all your favorite Die Laughing Productions performers. But the real stars of the show are all you wedding crashers in the audience. We have audience roles available for willing volunteers. The rest of you can sit back, laugh and enjoy the wedding day ruined by an untimely death and maybe help answer whodunit. 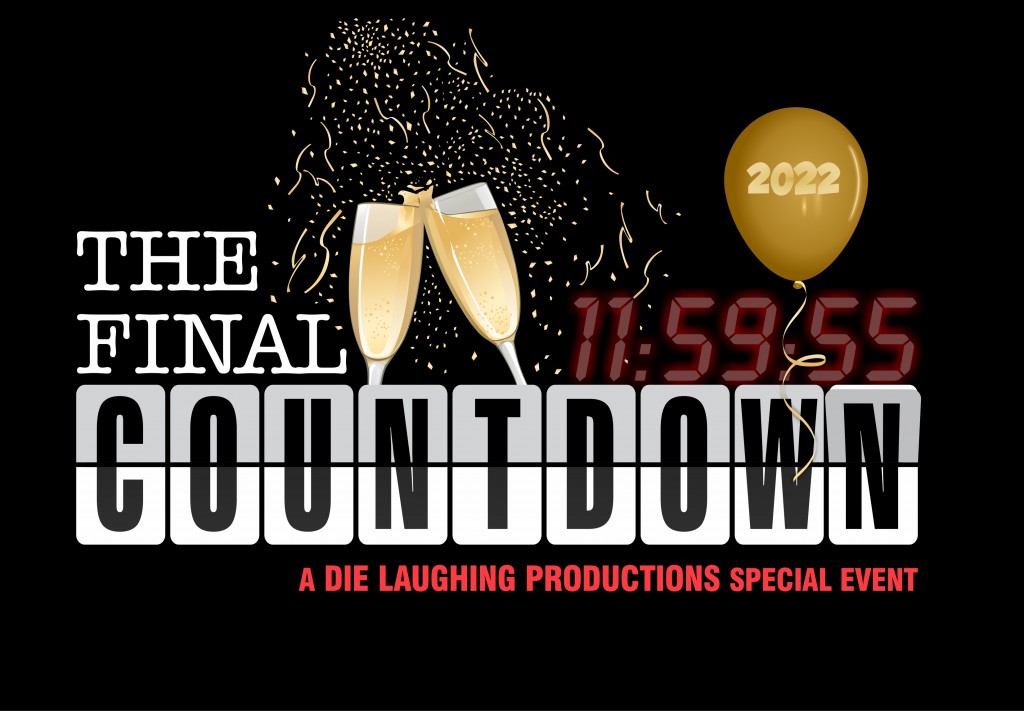 Die Laughing Productions proudly presents a New Year’s Eve Murder Mystery Celebration, The Final Countdown. You’re at the star-studded gala thrown every New Year’s Eve by billionaire Beauregard Beuford Dubois III. But before the champagne pops or the ball drops, a body does. It’s now up to you to solve this hilarious whodunit before the clock strikes midnight. It’s The Final Countdown!

This annual New Year’s event stars Justin Schlegel from 98 Rock’s Justin, Scott and Spiegel Morning Show as well as fellow 98 Rocker’s Joe Robinson, Rob Maher plus comedians Sean Gabbert, Tommy Sinbazo, Katie Robinson and Erik Woodworth. However the real stars of the show are you, the audience. We have several volunteer roles available and all of you will get a chance to solve this special New Year’s Eve whodunit.

Love is in the air…or is it murder? Die Laughing Productions is back and ready to have some fun at the expense of TV’s premiere dating reality show, The Bachelor. We proudly present, The Final Rose.

Contestants vie for the heart of our beautiful Bachelorette, but love truly is a battlefield. Before someone can find love and accept the final rose, some unlucky person will take their final breath. The Final Rose stars all of your incredibly lovable Die Laughing Productions performers and as always, you the audience. We have roles available for willing volunteers, and everyone will get a chance to solve our most shocking murder ever!

One Life Not to Live